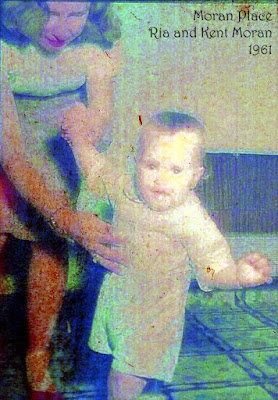 Today I thought I'd share a couple of pictures from a more recent generation of the Moran Family.

These first two pictures were just negatives.  I really like how they turned out simply by inverting the scanned image. 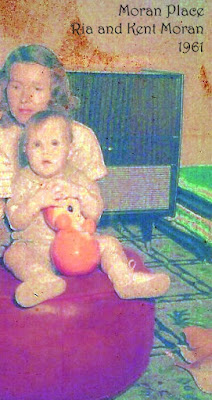 This is Ria with her son Kent.  The family was living in Japan because that's where Nathan Moran was stationed at the time.  It's also where Kent was born!

By the time the next picture was taken the family had moved back to the states, first living in Kansas City, and then moving back to the family home in Dresden after the deaths of James, Virginia and Uncle Brud.

It looks to me as if this picture was taken when Kent became an Eagle Scout.  Ria has a nice smile but Kent and his Dad share that same tight lipped, no nonsense look! 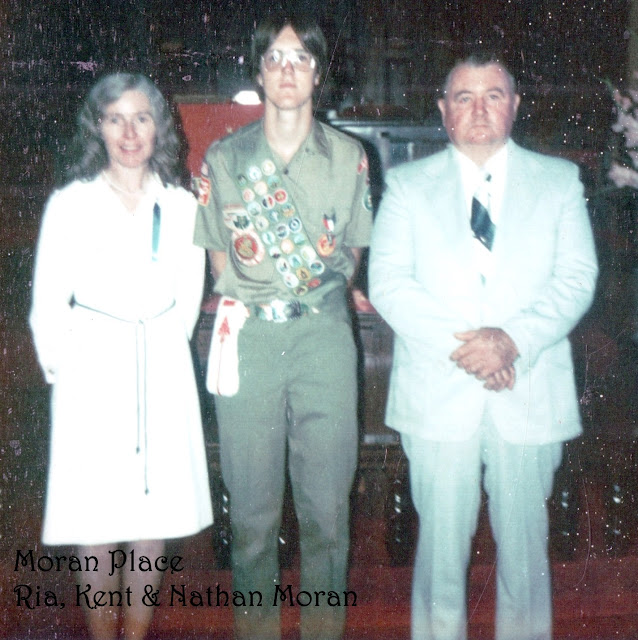 If you've read any of the Moran Place blog, you may have the impression that no matter how distant the relationship the family kept in touch.  You would not be wrong.

John Bell Tansil was born July 13 1881 in Dresden Tennessee, to Egbert Erasmus Tansil and his wife Laura Lucy "Jackie" Bell. When Tansil married his first wife, Lillian Summers, in February, 1908, they sent an invitation to C.H. (Brud) Moran. I gave up trying to figure out the relationship between Brud and John Tansil but I can tell you Tansil's relationship to Kent Moran looks like this: nephew of wife of brother-in-law of 2nd great-aunt of wife of 1st cousin 2x removed!!  Thank goodness Ancestry.com supplies that information!! 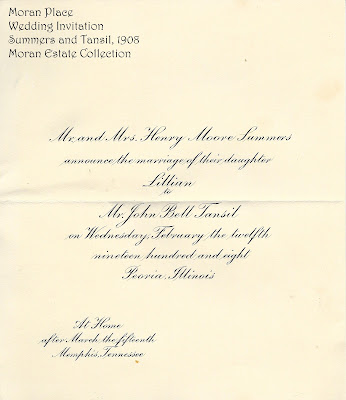 Lillian Summers was the daughter of Henry M. Summers and Mary Elsie White of Peoria, Illinois.  Lillian and John tied the knot on February 12, 1908 in Peoria.  After their honeymoon they returned to Memphis where John had been living and working as an attorney. 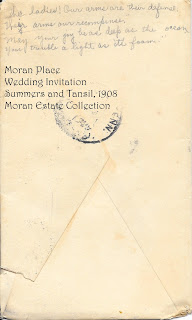 On the back of the envelope, Brud penciled in the following: "The ladies! Our arms are their defense, Their arms our recompense." "May your joy be as deep as the ocean, Your trouble as light as its foam."  I'm thinking that maybe Brud attended the wedding and perhaps he gave the toast. It's actually a combination of two different sayings.  "The ladies" was published in a book called Good Fellowship published in 1905.  "May your joy" is part of an old traditional Irish saying. 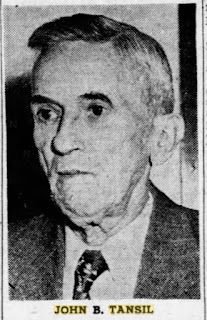 Sadly, the good tidings did not last very long.  Lillian died June 24 1914 in Memphis.  She was pregnant at the time and cause of death was listed as "pernicious vomiting pregnancy" with "shock and suppression urinary".  Although the death certificate said Lillian was interred at Forest Hill in Memphis her parents had her body shipped to Peoria for burial with the family in Springdale Cemetery.

It doesn't appear that John went through a lengthy mourning period since he married Amelia J. Murphy December 17 1914 in Perry County Arkansas.  Census records show that John and Amelia had moved to Billings Montana by 1920.  By 1930 John is single according to Census records.  Actually John and Amelia divorced and she was married to Richard Nethercott.   Sadly though, Amelia died January 20 1932 in Memphis.  The death certificate said she committed suicide with mercury bichloride.  Amelia was interred at Stephenson's Chapel in Memphis with her family.  Her husband Richard died in 1947 of liver cancer and was interred at Forest Hill Midtown, Memphis.

John married his third wife, Helen Fletcher, on August 12 1931 in Billings, Montana.  She was the daughter of Gayle Fletcher and Estella Walker.

John Bell Tansil was the US District Attorney for Montana from 1935 till his death in 1950.  He was also a senior partner at the firm of Tansil and Sutton in Billings.  He had been chairman of the Yellowstone Democratic Central Committee, a member of Alpha Tau Omega and Phi Beta Kappa. He died December 11 1950 and was interred at Mountview Cemetery in Billings.

Helen Fletcher Tansil was born with perfect pitch.  At a young age, Helen attended Ward Belmont Girl's Finishing School in Nashville TN where she studied piano and social graces.  Later she attended the University of Washington and the Chicago Musical College where she studied under Rudoph Ganz, Percy Grainger and Leopold Godowsky.  She returned to Billings and opened her own music studio.  The wedding of Fletcher and Tansil was the society event of 1931.  The Tansil home became the social center of Billings Society.  After suffering a stroke in her later years, Helen lived at the St. John's Nursing Home.  When interviewed by a local reporter Helen said she remembered when "breeding counted for something and 'old money' still outranked 'new.' After lighting a menthol cigarette Helen looked out at farmland turned city and remarked:  "It's not the same anymore."  (Source: The Billings Gazette June 3, 1979)

Helen died May 19 1983 in Billings.  She was interred at Mountview Cemetery. 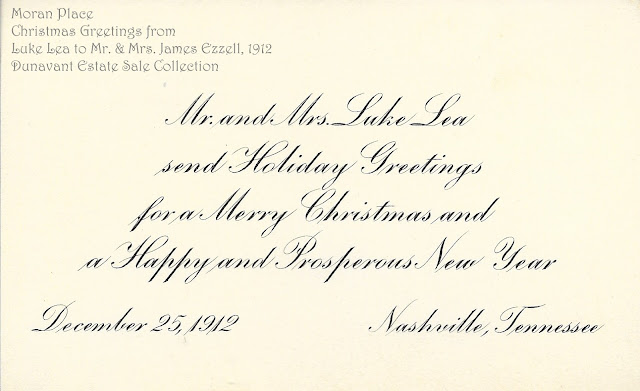 Luke Lea was an attorney and Democratic United States Senator from the state of Tennessee.  He was also the first editor and publisher of The Tennessean and a leading proponent of prohibition.

Lea's political career and work with The Tennessean went hand in hand with that of Fannie Moran Ezzell and her husband, Jim Ezzell.

Fannie served as Tennessee's legislative chairman for the American Women's Suffrage Association during ratification of the 19th amendment.  Later she was asked to join the Democratic National Committee and became Tennessee's first woman to hold a position with the DNC.  In addition, she worked at the Nashville Banner as the society editor. Fannie belonged to the Centennial Club, the Ladies Hermitage Association, Belmont Magazine Club and the Campbell Chapter of the Daughters of the American Revolution.

Jim had been a member of the agricultural committee of the Nashville Chamber of Commerce for many years and also the Cumberland Valley Association.  His obituary in The Tennessean, June 23 1941, says "He was a potent force in the political organizations of the county and state, although he stood for public office only once." I think the list of honorary pallbearers attests to his place within the political community of Nashville: Albert Houston Roberts (Gov. of TN 1919-1921), George Armistead Sr. (Editor in Chief, Nashville Banner),  Judge Colin P. McKinney, Attorney Miller Manier, C. C. Flannery (Agriculture Commissioner), Judge Litton Hickman, Judge Finis Garrett of Washington DC to name a few.

It wasn't surprising to find a Christmas card from Mr. and Mrs. Luke Lea to Mr. and Mrs. James B. Ezzell.
Posted by Mary at 6:08 PM No comments:

Promote Your Page Too